Exhibition Text
“Effects” is a Surrealistic theme based on social justice; keeping families together. Adolescents affected by parent deportation leading to family separation. It was created with intentions to let the viewers eyes shift around through the artwork and figure out what is that's going on. It incorporates inspirations from German Expressionism, Op Art, and Magic Realism. Currently what has been going on in these last couple of years and now more than ever I think it's a good idea to express what people I know and myself have gone through.

Inspiration
Some of my ideas were to have a young woman standing in the middle of the print standing tall facing forward with a background that would give an illusion that would mess with the viewers mind a bit as their eyes would move across the print demonstrating a sad mood. As far as intentions, I wanted to incorporate line, space, and value to this print, giving it good contrast in the black and white hues. Having the opportunity to create the block print with various colors seemed wrong to do as I believe having the two primary colors already given to help incorporate that mood it gives out to the viewers.
Planning
Process
8.​  In this step I began to apply black ink onto the tray with a small spatula.
9.  Spreading it out sufficiently with an ink roller so afterwards I could add it onto my block print.
10.  In pictures 10&11 it demonstrates how I began to add in the ink onto my block print for the first time. I started out from the bottom right corner and applied the water based ink a few times till I thought it was okay to place it on a blank piece of paper.
11.  ​Once I made sure the print was centered onto the paper I used a Baren to add a little bit of pressure to make sure the print was all over the new paper. After peeling the paper off the print carefully, I realized I would have to repeat this process a couple of more times to get a better print.
Tools Used 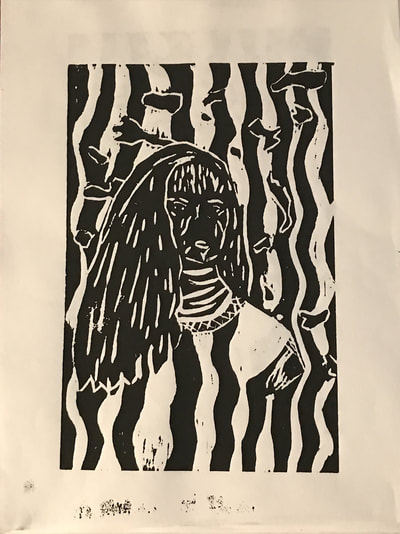 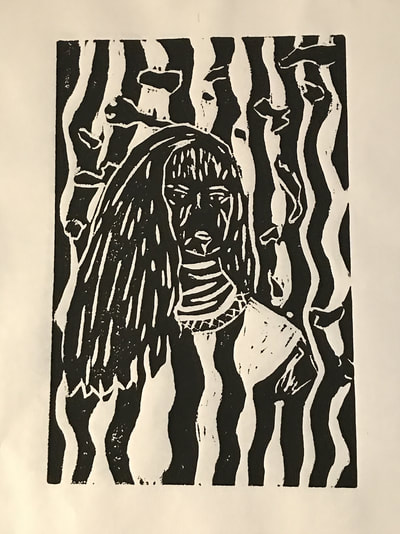 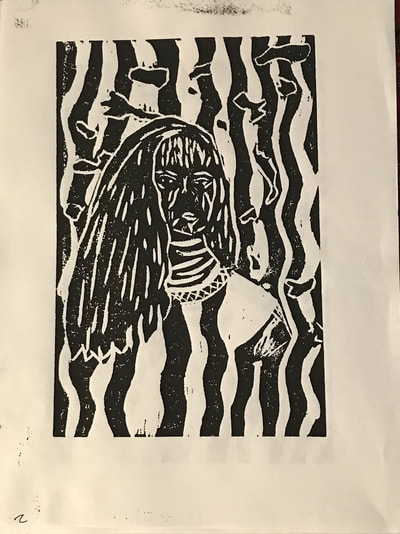 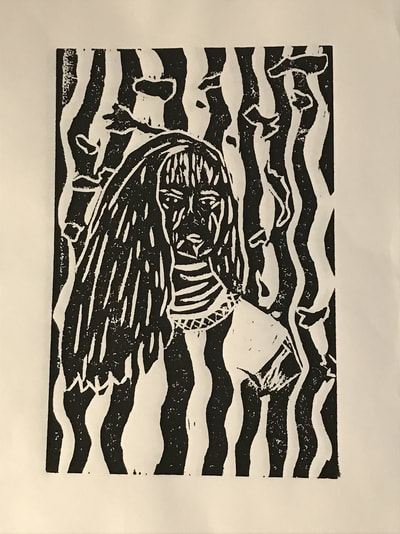 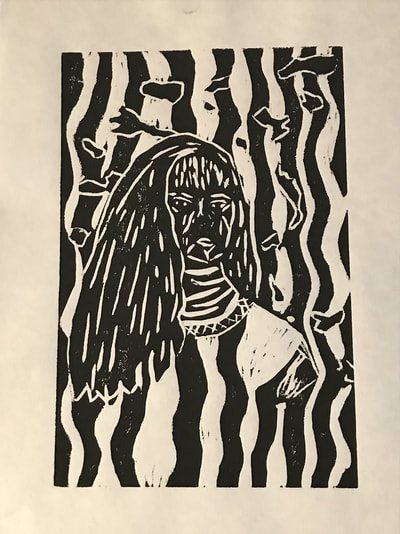 Considering the fact that Block Printing was completely new to me, I didn't expect for it to look perfect on the first try, but that didn't stop me from trying my best to get a clean and efficient outcome. Every new try I would get frustrated because I just wanted a clean print but if it wasn't one thing it would be the other. For example, in the first experimentation I tested out the ink on the block and soon realized that it was covering up most of the carves on the face and hair. I later took some time to go over and carve in a bit deeper in certain areas of the work so that the second time I rolled on some ink the lines would be more visible. I was having a hard time with the blobs in the background that would collide with the squiggly lines until I realized that I could carve them to separate them from one another. By doing so, I outlines the blobs so the ink wouldn't go into the lines and make them both mash up looking bad. On the fifth attempt, I thought was the best outcome out of the rest of the block prints although it was still grainy in certain parts.

After finishing "Effects" I realized I could have carved into the block a lot more efficiently throughout her face as her eyebrows and nose were untraceable once I began to apply the ink on the first attempt. It was less grainy compared to all the others but it was not what I considered good so I gave it a couple more tries. Disappointingly, all the rest of the prints were very grainy no matter how much ink I placed on it. On the fifth and last attempt I could finally see the intended white lines. Also I could have been less scared in carving into her hair and added in more precise cuts. Looking closely near the bottom of her shirt and shoulder there are some areas where I didn't carve enough on to the block. Contrast could have come out a lot better in most parts of the artwork but I know that for the next time when I'm planning on creating a print to think ahead and know ​how the technique works and which tools I can use the for the type of cut I am planning on making for the piece. Overall I am very proud of the piece as it goes well with my topic. One thing that I noticed after finishing with this piece is that I should be more adventurous with new techniques and not limit myself to the things to get a good clean block print.