My inspiration for this project came from a most recent protest which was a (school walk out) I was in with a lot of other school members from all over Milwaukee as we drove to Racine on a school day to march and make our point on getting our representative to do something about DACA. This is a social justice problem that I have been making several art pieces about and so far this is one from the start I knew I was going to love. It's by far the one that I have put so much effort on to get my point across.

I started off by playing around with Photoshop and watching A LOT of videos of how to do simple things like use the the Lasso tool. For example I also played around a lost with the metal bars. I tried my best to not let them look like gray long skinny rectangles.  Then I made an official new page and began to use the layout that I drew out for myself. Deciding that it would be most easiest to crop out all of the people and banners at the same time and then later worry on resizing them to how I want them to be. Making sure I get an accurate cut on each one was very crucial as if I messed up it would make the piece less realistic. Something that helped achieve that was getting the Wacom Tablet, the pencil helps a lot depending on the pressure that I used, something I can't do with a regular mouse. Lastly I added in a gradient in the background and got one last figure from one of the pictures, used the paint bucket to the color black to make it seem like a silhouette of them representing the family and loved one behind bars. Lastly I made sure all the people were decently the same color since they all came from different pictures so the sun was hitting g them from different directions. Also I fixed some minor things in the piece till I was all finished. 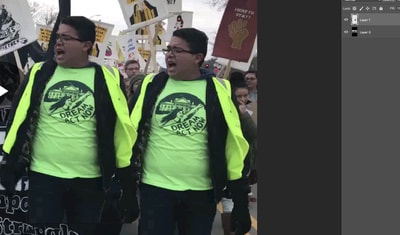 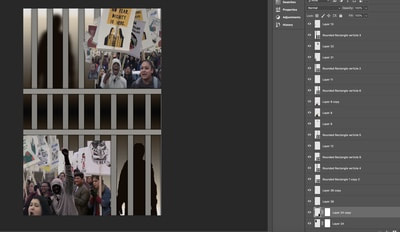 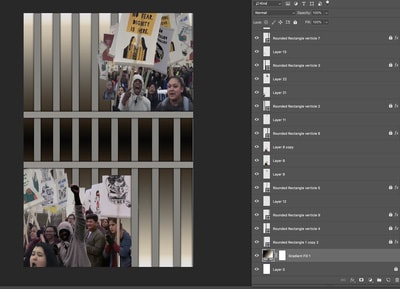 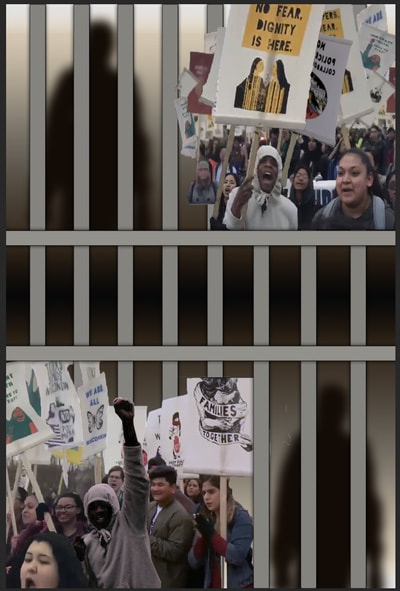 Some of the things that I had to experiment with were really EVERYTHING. I had never used an online photo editor in my life and everything seemed as if it was rocket science. I had to play with the majority of the tools to see what they did and redo the process over and over again in order to get what I wanted, The hardest part had to be the jail cell doors as I wanted them to look as realistic as possible. I had to play a lot with the gradient, shading, and the opacity. The most time consuming was all of the quick selection that I had to do it may seem as if I just got groups of people and placed them together but no, I had to get individual people and posters in order to make it fit the way I wanted and look much more realistic. Another thing that I had to experiment with was the people, since they all came from different photos, they came in different color shades. So I had to tune them to look the same, some were quite difficult as no matter how much I would change it, it wouldn't fit to look the same as all the other people.

For this entire piece I used Photoshop CC 2018
I also used a Wacom Tablet which helped me with much more details that a regular mouse could not have made things as easy.

As stated before, "Fists Up" has been my favorite piece so far for the fact that it demonstrates a social justice problem that I have been making several art pieces about and so far this is one from the start I knew I was going to love. It's by far the one that I have put so much effort on to get my point across. If I was to do this project again I would most definitely  take better pictures, when I attended the protest I didn't realize how everyone would have different colors and shadows depending on where we were standing considering the fact that the pictures were taken at different times. Another thing that I noticed about the photos was that they would be positioned on certain parts of the picture frame that were quite inconvenient, (luckily I had many more) when the time came to crop them out and place them onto the final page I noticed some posters were cut off and that made it really difficult for me to make it look more realistic.  Personally I like how they're candid photos and the students are just expressing themselves for what they believe in. When I was creating this piece, one thing I knew for a fact that I didn't want the metal bars to look really fake, reflecting on how I did it, I could've done better by using the gradient scale even more and blending it out. Overall I really like how I learned so much stuff out of making this piece.