"Trauma" is a Surrealistic theme based on anxiety, the colors enhance the painting as it demonstrates a cold expression throughout all three faces. The contrast in colors grasps the viewers attention and keeps their eyes moving as they see several aspects of the piece.  This self portrait is my way of expressing the trauma that was brought to me after loosing my father due to immigration laws.

When I was looking for inspiration with previous famous art pieces I was looking for something with a hidden message of distress. Frida Kahlo is a great artist that displays pain and sorrow very well in her artworks, with that I immediately took her as one of my inspirations for this piece. "The two Fridas was a very good example of what was going through my mind when sketching for the fact that it shows different Fridas but they're somehow still connected. The Two Fridas was painted shortly after her divorce with Diego Rivera, the love of her life. Her divorce brought her to create this piece as one of the Fridas has a broken heart and the one to the right is independent and strong. Both are holding hands but the one to the left with the white floral dress has scissors cutting the cord causing blood to stain the dress and later on cause her to bleed to death. Having them hold hold hands shows how they unify and go as one, how they understood each other and was there to comfort one another.
Salvador Dali, The Face of War was the most inspiring to me, the multiple faces, the choice in color scheme, and most importantly the repetition in sorrow faces. It all gave me more and more ideas to continue with my piece. The painting was created because of the wars that were occurring and the frighting images that were shown that gave Dali more inspiration. The exact same thing was going through my head, only instead of war it was the fact that my father and other close family members of mine were being ripped apart from us due to immigration laws. In "The Face of War" the bottom right shows Dali's hand print. Being quite honest the painting of "The Face of War" is one of my favorites from Salvador Dali. Overall my thought was that if I used these two artists as inspirations for my piece that it would help me be successful in presenting the mood of despair and sorrow into it as they did so well.

For this project I wanted to make it different compared to the usual self portrait, I wanted to make it very personal and finally take a step out to speak about my depression and anxiety after the loosing my father at the age of five due to immigration laws and not being able to communicate with him for over ten years. With that being said, my plans for this piece were to make it dark, emotional, and just overall be my big step of expressing my feelings towards an art piece that will get viewed and critiqued.
In my sketches above, I explain how I got to every sketch and the meaning behind every thing included into it. For example The splashes of what is soon to be a bright color of paint are a representation of all the happy comments and support people give and how that differs from all the darkness within.  I wanted to make sure the background was all dark and had a gradation of red going into black for the fact that they're such bold and intense colors that help express the emotions that I was trying to evoke the viewer with as that's how I felt with the realization that I would possibly never see my father again. Black represents the unknown and sad feelings as red expresses danger and passion to almost demonstrate the suffering. The reason as to why I positioned each one of me in that way was because the two on top are looking down at the primary me. Both judging me in my thoughts and actions representing how at the moment I thought everyone was doing. The one on the top left had her hand covering her face as she seemed disappointed and not in approval as the one to the right has her eyebrow up deliberating a face of confusion.
Above are some of the pictures I took when I was planning on adding for the self portrait.
At one point I came up with the idea to trying to emphasize the center person to make it seem as if it was in the process of insanity but later decided on keeping two faces and making them frown about the centered one that was going to be just a regular expression but faced the other direction. This was difficult for me as I had just gotten my wisdom teeth removed and my cheeks were all swollen. Eventually I didn't care and chose to take a sufficient amount of pictures just in case one made me change my mind with the final piece.
Bellow are some of the final poses that I took for all three faces, I made sure that I could add emotion in the pictures by making certain facial expressions. For example I would raise an eyebrow look the other direction in despair. The pictures that I incorporated in the portrait were the second, third, and last. 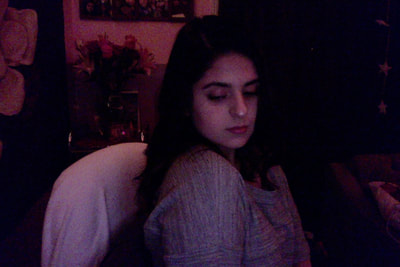 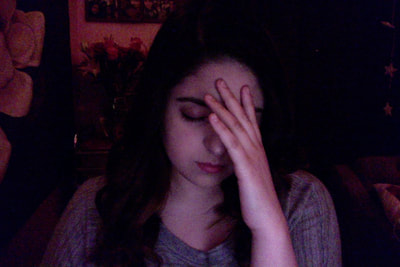 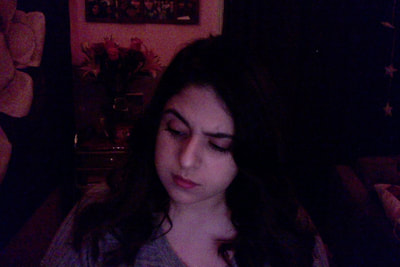 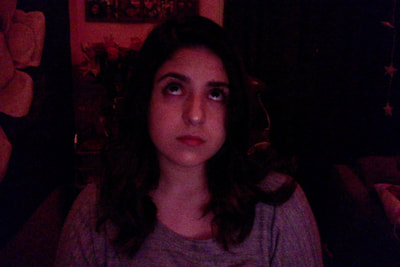 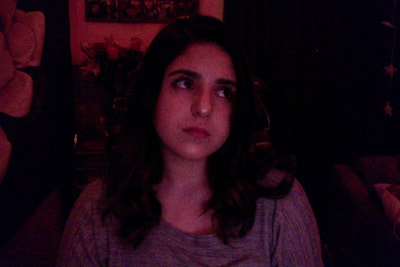 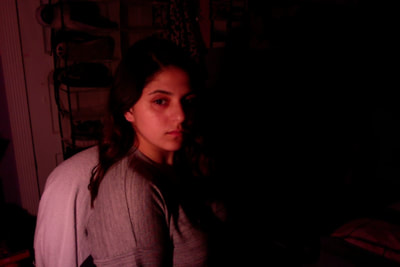 enough) I made sure I placed it all over the canvas even on the sides, preventing that it would slant on me I did it all in the same hour. Once I was done I was glad to see it was fairly tight and I wouldn't have to start over. Once that, I set it aside on a drying rack while I came up with some ideas as to what to create for this project.
5.  After having my sketch done I considered doing the grid drawing technique because that has always been most simplest for me but since I'm really interested in trying new forms I decided to go with projection.
6.  I connected the computer to the projector and began to trace the image to the canvas and so on with all other faces as i would have to upload all three images separately and closely place them to where I thought was best according to my sketch.
7.  Once having everything sketched out I began to make swatches for the colors I would use in all different parts of the portrait (Black & White faces, red fading into black gradient in the background, red gradient in center face, and yellow splatters) into my sketchbook so I knew exactly what I was going to apply without worrying about painting something incorrectly on the final product.
8. Painting the gradient in the background starting from black and gradually adding drips of red in every new shade to turn to a deep red on the left side of the canvas.
9.  Beginning to paint the yellow splatters with a metallic, this was a struggle as I didn't actually splatter paint onto the canvas, I kept it controlled and eventually decided to add design
10.  Heading  into the center image I decided to keep her in the red fading into black as she fades into the darkness but yet still having that little glow of metallic yellow around (center) me
11.  Moving on to the top two faces, painting them in black and white to show contrast and deliver the melancholy mood throughout the piece.
12.  Lastly, adding finishing touches making sure everything looks correct and beginning to evaluate my piece.
​

After finishing "Trauma" I realized I should have pushed myself further with the metallic yellow parts, there should have been dramatic brush strokes or even a mixture of colors, gradation of yellow in swirls even, but something so it wouldn't look so plain and boring. After watching several videos on how to blend correctly I still managed to paint the faces incorrectly, I should have thought ahead when planning for this piece. On the top right face and how difficult it would be for me to paint the hair as it is quite similar to the background. Another thing I would change would be the in the middle where they connect, I should have either left some space between them or added a brush effect to make it look a bit better.
Overall I'm quite pleased with myself, this is the first time I use this medium on such a large canvas. The hardest part was actually finishing the three faces and actually talking about it to everyone when they ask me my planning or how it came to be. Before adding anything onto the canvas I went and added it into my sketchbook just in case I didn't like it I would be able to have my first attempt and then reflect on why it looks good or bad and how I could make it look better.

1) Clearly explain how you are able to to identify the cause-affect relationships between your inspiration and its affect  upon your artwork.

For both of my inspirations I was able to identify that

2)What is the overall approach (point of view) the author (from your research) has regarding the topic of your inspiration?


3)What kind of generalizations and conclusions have you discovered about people, ideas, cultures, etc. while you researched your inspiration?

5)What kind of inferences (conclusions reached on the basis of evidence and reasoning) did you make while reading your research?