Exhibition Text: Us Against the World is a digital piece in which is inspired by Salvador Dali as his work includes a limited color palette and Stephanie Barenz a Milwaukee artist that I research in my comparative study, her piece includes a monochromatic color palette of muted colors with human figures that are unidentifiable. For this piece I wanted to use those aspects in order to create my own by still relating to my theme of Immigration Issues and how it affects the new generation dreamers

I quickly wanted to make a sketch on something that popped into my head and it was on the last moments of when I saw my father sitting on the other side of a glass window but it just wasn't what I was going for so instead I came up with the idea to make something less realistic which is out of my comfort zone for the fact that I prefer to make things that are seen everyday and not made up. So I knew from the start that this project was going to be a bit tough for me. In my second sketch above I have several sketches of "demons" which are representations for those people in society that are against immigrants. Again I found myself having a hard time because I couldn't think of how one would look so I went from something that would look like the devil to something you would see in the movies. In the last sketch to the right I have the main people that was what brought this piece in the first place. I wanted to show a little girl and an older young man holding her close to him because that's all they have, themselves against the world. The twirl going around them was just a subtle way for me to incorporate the butterflies going around them to give the viewer a hint that they're dreamers. Also the twirl is just another hint that they feel more isolated from the others.

Then I went in a gradient and tried to practice with layering darker colors on top of one another and trying to blend them out with a color that would match both. I started to notice that for everything I needed a different brush. Also opacity was a big thing for me. If you notice the haziness between the grays in the fourth picture to the sixth, Its very different because I know that I want the crowd behind them to be exaggerated (in color) but not too much to the point where the piece becomes less balanced.

browns were too similar and I ​wanted to make one of them a bit darker so in order to do that I would just have to move the dots on the wheel and then adjust the bar on the bottom of the wheel to make it darker or lighter depending on what I was going for. The first picture on the left just shows a screenshot of the color palette I saved for the piece, I didn't use all the colors but I had them there just in case. 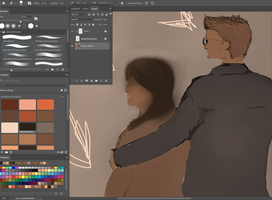 Adding in some arrows to give myself a sense of where the light is going to come from so I know where to place shadows, I moved on to the man and the details of his face and hair but it was at this point when I realized that I didn't need all the detail in the characters as long as I had general outline and color to show what I am trying to portray just like my inspirations did in their pieces.
I later went in with the same light gray I added into my color palette that I used for the young people "dreamers" and covered all the details I created that gave them personality. I then went in with a very dark brown and outlined certain important features such as hair, hands, and clothing.

As this is my first piece using digital paintbrushes, it took me a longer time than I expected it to as a learning experience. I had an initial piece in mind but as I went through it I kept adding things and making minor changes. For example, at first I had planned to have a mob of "demons" in the background but later I realized it would look to cluttered at that was not what I was looking for, so I decided to just draw one large one but even then it was not exactly how I planned it. In a good way, every change I made was for the better, and with time I learned short cuts, for example I kept one hand on the alt z while the other hand was on the tablet