"The Weeping Children" is a Expressionist piece that demonstrates repetition, contrast in colors, and lines. It was made to portray the message of the struggles of a single illegal immigrant having to take care of their kids, and trying to move ahead giving them a better life. It incorporates aspects from; Henri Matisse's use of repetition in "the Dance" and Pablo Picasso's nonverbal communication through facial expressions. Combining both inspirations helps me portray this struggle that is not talked about but is happening on a daily basis.

The reason as to why I chose these particular pieces of art is because I found a connection in them that all helps make "The Weeping Children" happen, with that said, the picture I took of my sister is what started it all, her pose intrigued me so much and I wanted to incorporate it into my dry point sketch, I did several investigations to find an artist to go with it and soon remembered about Matisse's piece, "Icarus Plate VII."  The cut out resembled a lot to my picture and decided to go from there.
Trying to make my piece more significant and let it have meaning, I decided to make several of the cut outs throughout the artwork in a circular formation to represent a unison, that idea came from another of Matisse's works, "The Dance."
Lastly I felt as if something was missing and wanted to add in a lady (a mother) and to create emotion throughout the piece, I incorporated ideas from Picasso's painting of "The Weeping Woman".
Putting all the pieces together I came with the idea to create a figure of a weeping woman in the form of a mother in the center as a group cf figures portrayed as children are all connected and show that they are united no matter the rough moments of life. The mother fears the risks of separation due to immigration laws.

With all four insirations I planned on making a piece that had "The Weeping Lady" right in the center and figures would be all around her in a circle holding on to one another by arms and legs, they go through her as it would demonstrate unison. My main objective was to demonstrate the emotions that can be given through art.

7.  Picture nine shows some paper that was cut in to smaller pieces and the reason for that was so I can use them to wipe the ink out of the block until it was all off (carefully making sure that it doesn't wipe off any of the ink inside of the creases).
8.  Once it was all clean I dried pf the paper that I had previously put to soak and added the paper and put it in the middle of two sheets of paper so I can transfer the print onto the paper. (15-17)
9. Using a roller to press down the image and transfer it to the new paper, having to adjust the pressure as it was quite loose so when I would twist the handle it would move the paper from the left side to the right in a matter of seconds.
​10.  The outcome of my first print, noticing that it's not well inked so I would have to try again until I get a clean print.

Having a cutting tool to make the crosshatching technique, some ink, a palette knife to spread onto the block including some gloves to avoid getting the ink onto my hands so I wouldn't have to go wash my hands when the time came to get the paper out of the water and dry it. Some paper cut into smaller pieces in order to wipe off the excess ink of the block. Lastly having to use a roller to place in my print and several other papers in order to create the final print. 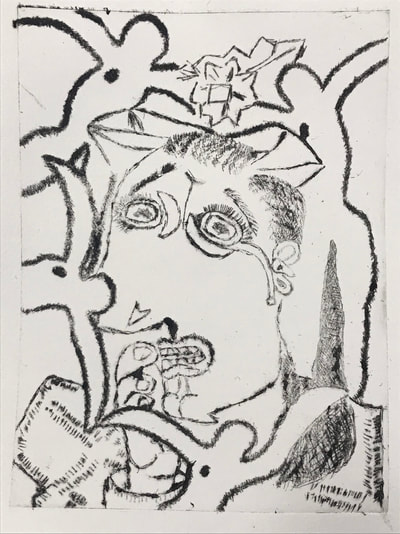 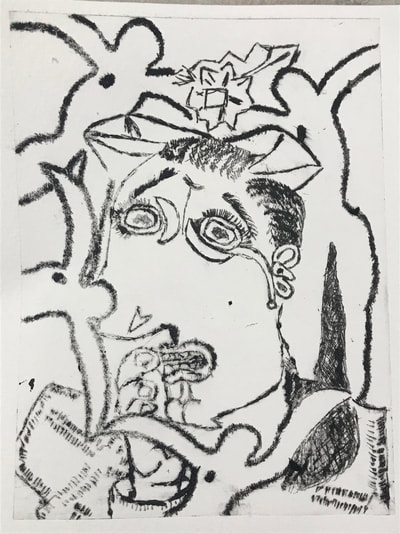 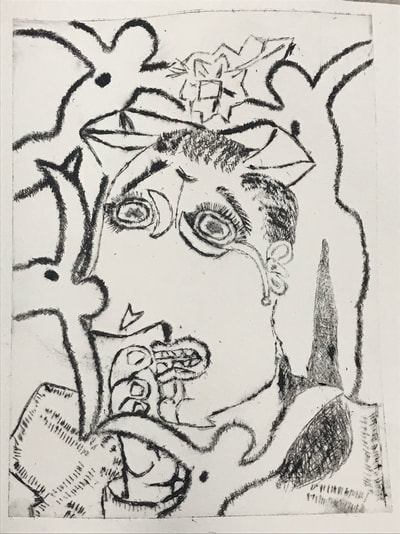 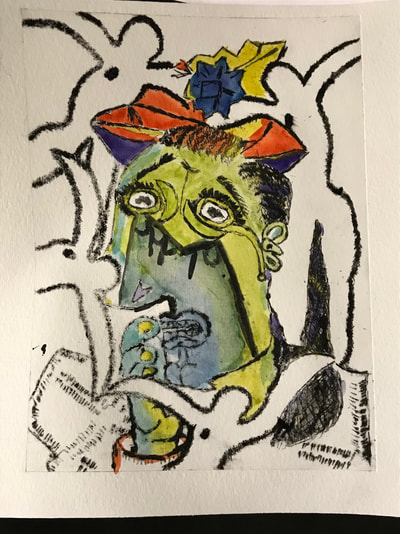 When creating "The Weeping Children" I had a lot of doubts with the piece, I feared that it wouldn't come out well and I let that get to me. It refrained me from trying to finish the piece properly rather then how I left it. Once I had my print in the new paper I realized there were too many white spaces in the piece and so I decided on panting over it with water color, I used the colors; orange, violet, blue, yellow, and little hints of green to add color in the mothers face just Picasso used them in "The Weeping Woman." I decided to keep the figures around her white to show contrast and let it be the second thing a viewer notices after seeing the woman-which is the main focal point of the piece.

​This is the second piece I have created with Dry Point, the first one I created was called "Hope" which I briefly explain in the "Planning" section why I dint go ahead with the plan. This piece I really wanted to push myself with my abilities, usually I like simple things that look smooth and appealing but with this piece I decided to use Cubism and repetition, not only with the cut out figures that Matisse uses in "The Dance" but also in the technique that is used to create the print. I knew from the start that it was going to be difficult to incorporate all of the stuff I had in mind into one piece to create complexity and have the viewers eyes shift around trying to figure out what it is they are looking at but still keep it clean. The most struggle was recreating "The Weeping Woman" from Picasso's artwork. I decided to use most of the features in the shapes he uses in the face to create emotion and incorporate it into my piece to help reveal the emotion I intent to give towards the viewers. Deciding to keep the cut outs white to show contrast in the woman and them. I'm quite unsatisfied with this piece as I could have not been so afraid to add in the details in the woman's face. I should have also painted the background a color because it's just too white and it makes the print look incomplete. Dry Point was definitely an interesting new technique for me but I don't think this would be my first choice when it comes to creating other projects.

1) Clearly explain how you are able to to identify the cause-affect relationships between your inspiration and its affect  upon your artwork.
In my inspirations, their causes that affected them to create their pieces were due to the fact that they wanted to express themselves, much coming through expressionism. Pablo Picasso was one to top it off with the nonverbal communication and wonderfully portray the facial expression of a depressed woman  in which relates to, "The Weeping Children"
2)What is the overall approach (point of view) the author (from your research) has regarding the topic of your inspiration?
The overall approach regarding the topic of my inspiration was to relate it to the difficulties of a single parent (a mother in this case) once their spouse has been deported and left behind to raise their children alone.

4) What was the central idea or theme around your inspirational research?
The central idea around my inspirational research was the expression brought through a person and the feeling they can bring to a viewer because of it. I wanted to correlate it back to the social statements as I did in my Block Print but only this time revolve it around the parent issues and struggles rather than the effects of an adolescent.

5)What kind of inferences (conclusions reached on the basis of evidence and reasoning) did you make while reading your research?
The kind of inferences made during my research were on how the artists were able to express themselves in a way where it isn't necessarily saying anything but is giving meaning towards just how the people are spaced out through the piece and their facial expressions.
​​